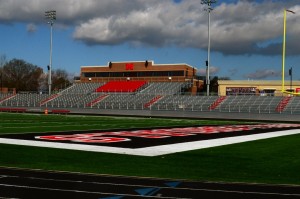 (AL.com) There were blowouts in the regional quarterfinals of AL.com’s quest for the best high school football stadium in Alabama, and there were battles.

But … will this week’s regional semifinals be the end of the line or will it be one more step on the road to the top? Only time will tell — and time is up at noon (Central) on Friday for this week’s round of voting.

In the regional quarterfinals, there were 39,430 votes cast — in some cases, they were part of lopsided wins, such asEnterprise‘s 40-percentage point win over Fairhope, Opelika‘s 45-percent win over McGill-Toolen andAlbertville‘s 43-percent win overGuntersville. Give props to Saks, which stepped on the gas in the final day, turning an eight-percentage point lead over Hoover into a 27-percent blowout.